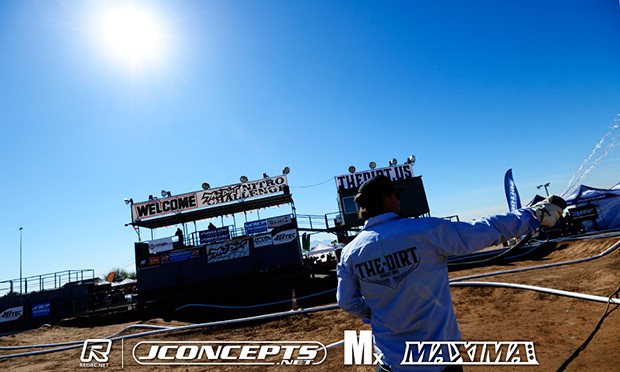 By The Dirt CrewMarch 22, 2021Nitro Challenge, Race Registration
No Comments

I cant believe we are making this announcement Finally!! From the very first race I put on in 1999, I thought R/C racing needed a national series. I figured I should start small and put on a local series in Southern California, so I did.  I called it the Southern California Saturday Series. I was between the 2 tracks I operated, The Dirt at Proline (Proline’s test track) and The Dirt Racepark in Hemet. I ran the series for 7 years and it was a sell out every year. I eventually decided to stop the series and focus on my growing traveling track building business which at the time was taking me all over the world from Italy to Sweden to Brazil to Spain to Canada to Mexico and tons more! It was an amazing time and full of great friends and memories. The traveling track building business is still as busy as ever  building close to 30 tracks a year as well as build trips to Dubai, Greece, Australia and a few more in the works! In the meantime, the Dirt Racing’s events have grown into some of the largest races we have here in the US and attract racers from around the world.  My desire to bring a National series to the US has always been something I am working toward with building my relationships with the manufacturers and racing facilities as well as getting myself ready and aligned with the right people and manufacturers to make it happen. Well the time has come and I am so freaking excited to announce for the first time, The 2022 USPro Cup National Series!!!!! We will be using existing races as well as adding two new events to the series. First will be one of the largest off road r/c car races in the world, The DNC! The DNC brings racers from around the world ( 35 different countries in 2020) and is considered one of the most prestigious wins a racer can attain. Second will be the new Silver State Indoor World Championships! The Silver State is on track to becoming the largest indoor race in the world and also brings some of the worlds fastest international drivers to compete for the title. Silver State has a long celebrated history for being one of the roughest track surfaces in the off road racing circuit. The 3rd race will be the 8th annual Lonestar Challenge held at the famous Thornhill Racing Circuit. Thornhill has put itself on the map as the best covered off-road facilities in the nation. Holding 3 ROAR National events as well as 7 Lonestar Challenge events, it is seasoned on creating great races! 4th on the series calendar will be the all new DNC East event! Every year we get tons of e-mails asking if The Dirt can hold an event on the East Coast. Tons of racers want to come to a DNC event but cannot take that much time away and travel that far. So, to answer your requests we are bringing the DNC style event to the EAST!!! We are taking applications for venues at thedirtracing@aol.com. This race will be held in the second half of the year. We will be sure to not be close to any of the Racetime Entertainment events (as much as possible) as I have tons of respect for Dave and all he does for the racing community on the East coast. Finally, the 5th race of the series will be The USPro Cup Finals in Southern California! We are currently working on a few locations and will have more info as it gets finalized.

It is a dream come true to create a platform that will not only unite some of the biggest races in R/C car history, but it will more importantly showcase the drivers and teams that make this sport awesome. The guys and girls who have dedicated their lives to racing R/C cars for a living!!! Countless hours and sacrifices every week to keep grinding and perfecting their talent. All of this to win the next event.  Now we can carry each win into a National Series that has a huge title and prestige to win. The website will be there to highlight and celebrate the top drivers in the series. Similar to Supercross or Nascar or the Fed Ex Cup in golf, the USPro Cup website will have the drivers profiles, sponsors, videos, interviews, highlights from races and most importantly points standings!!
I have recruited some of the top figures in the R/C racing world to sit on the board for the USPro Cup to help keep it balanced and in the best interest of the racers.
For the 2022 season The Series Champions will have a $10,000.00 purse! We will increase the purse if we get bigger sponsors as the year goes on.
I have Adam Epp from AE Media Inc. creating the new Series site. We have been working together for the last 20 years and he knows what the series site needs to make it awesome. He’s been working on it and he’s excited too.
I know there are tons of questions but I wanted to get the news out ASAP and share the excitement. We are looking forward to making this a one of a kind new platform to showcase to the world how awesome and exciting R/C car racing is and how amazing these professional R/C car racers really are. We have a great team behind this as well as huge support from the R/C manufacturers. You never know, we might put one race at the end of THIS year (2021) to make a mini series (DNC, Silver State, and a FINALS?) Be ready 🙂
The USPro Cup series is open to every racer just like the DNC or Silver State, Lonestar etc. The points will only be given to the 100% sponsored racers. Drivers who race professionally. The website will include sections for the fast non-sponsored as well as the young guns to watch out for and the ever growing 40+ fast guys!
Thank you to all of the racers and manufacturers who support The Dirt Racing and our events. We look forward to the new series and can’t wait to see who will rise to the top of the USPro Cup Championship Series!!